Thanks to the  Gennies Downunder podcast, I recently came across the Down Survey of Ireland.  This wonderful website has maps of the Irish townlands from 1656 to 1658. Taken in the years 1656-1658, the Down Survey of Ireland is the first ever detailed land survey on a national scale anywhere in the world. The survey sought to measure all the land to be forfeited by the Catholic Irish in order to facilitate its redistribution to Merchant Adventurers and English soldiers. Copies of these maps have survived in dozens of libraries and archives throughout Ireland and Britain, as well as in the National Library of France. This Project has brought together for the first time in over 300 years all the surviving maps, digitised them and made them available as a public online resource.

The website is organised into two sections (see the tabs at the top of their home page)
I found the Historical GIS most informative, just play around with all the different settings, as they all give you different information.  For example:
Because I know my family's townland is Claughey, I was able to drill down  in the Historical GIS section and find out the land was owned in 1641 by the Randal Earl of Antrim Macdonnell, (Catholic) , but by 1670 had changed hands to  John Viscount Massereene Clotworthy,(Protestant).
So now I have two more people to research to put my history in context. 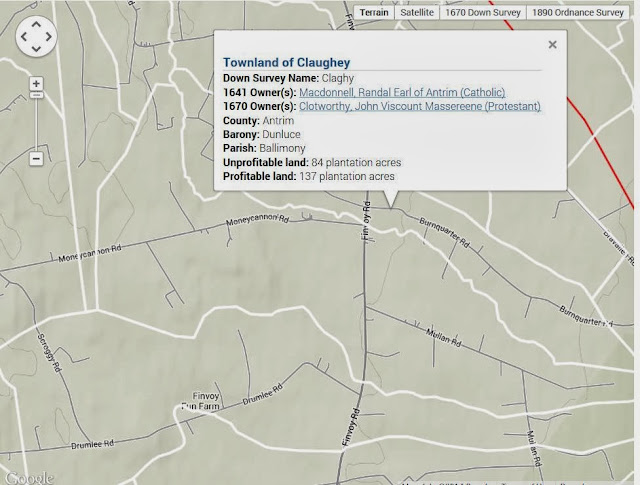 The Down Survey Maps section is very useful and interesting as it gives information about the actual area, so definitely this is one to also explore.  It takes time, but if you have Irish ancestors, it will be worth it.

I  love this quote by Ralph Waldo Emerson, it does ring true.