Continuing the series of Genealogy for beginners, lets look at census records from the UK

Census records in the UK are one of the key records you will use when finding ancestors from that part of the world. And oh Lordy were there census records! One thing the English did well was record things, right back to the Kings scrolls held at Harvard University.

The great thing about the census records is that they proved a lot of information, including:

So from this information you can often work out the aprox year of birth for all the people listed, and know where they were born, and when people married.  This information often leads you to other records and helps  you follow the family line.  Particularly, as most families lived in the same area in the past.

Here is one of my records of the Farr family 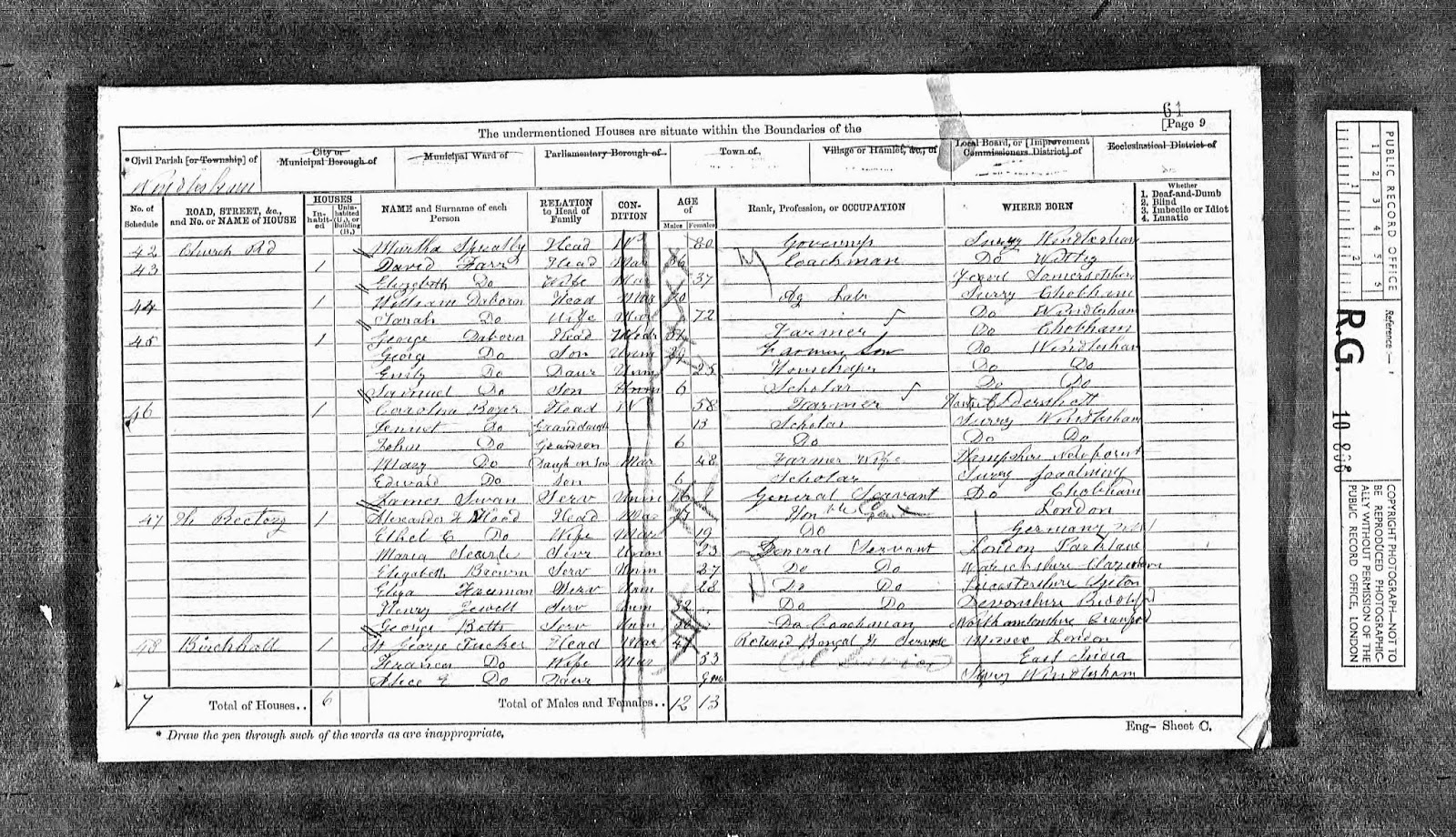 To understand the records, you need to first try to find which area of the UK the family came from, what year you might find information and start looking.

My advice is to read up on the years census you are looking at as it will help you understand what you are reading.

A census has been taken every ten years since 1801 with the exception of 1941. Reading English census forms can be tricky, as they used marks and abbreviations.  Read about the particular census you are looking out before you make assumptions. Check out the National Archives link here to keep on track.  Read what they say about 1841 for an example:

The census takers were instructed to give the exact ages of children but to round the ages of those older than 15 down to a lower multiple of 5. For example, a 59-year-old person would be listed as 55. Not all census enumerators followed these instructions. Some recorded the exact age; some even rounded the age up to the nearest multiple of 5."

Remember, Census records from 1841 to 1911 are available in person at the UK National Archives, Kew.  But that is a long way from home for most people, so this is where you find them online  (costly, but worthwhile). Note that both sites have indexes of all the census records, but I found you need to view the original document to get the most information.

Census records from 1841to 1891 include ENGLAND, WALES, CHANNEL ISLANDS, & ISLE OF MAN.

These are online indexes at Ancestry.com, and can help in track people down.  They are limited in their scope however, as many people were not allowed to register to vote.

The census records were taken every ten years since 1801, with the exception of 1941. The returns of most use to the family historian are those from 1841 onwards. Records may only be inspected after 100 years, so the census returns presently available for public scrutiny are 1841-1911.  These are available at Scotlands People.

Again, each year has some aspects you need to know, so follow the links to the particular year you are looking for and read about them first.  An exaple is this information about the 1841 census

"A woman might return to her family home for her first confinement, therefore the given birthplace of the eldest child might be an indication of where her parents are living."

Ireland is a bit different from other areas of the UK, as many of the records have been destroyed.  I have Irish ancestors, and have found I had to be creative.  Finding many records by going to Ireland.

The original census returns for 1861 and 1871 were destroyed shortly after the censuses were taken. Those for 1881 and 1891 were pulped during the First World War, probably because of the paper shortage. The returns for 1821, 1831, 1841 and 1851 were, apart from a few survivals, notably for a few counties for 1821 and 1831, destroyed in 1922 in the fire at the Public Record Office at the beginning of the Civil War.
When going back in history for Irish records, look for the Tithe Books, Wills and Poor Law Records.  To find them click here.