Linking the photo to the family

The central women appears in another photo I have : 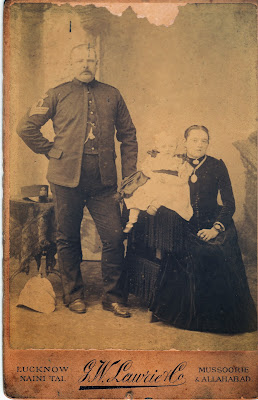 She looks younger in this picture, I asked the team on rootsweb about the soldier and origin of the photo, and found out that GW Lawrie & Co. was a scottish photographer working in Lucknow, India in 1880s and 1890s. Persuaded by his brother-in-law, Fred Bremner, to change to the new dry plate technology in the 1880s.

This is a great site for identifying photographers: http://www.19cphoto.com/bios.html

If we assume this is their only child, and possibly the first.  So I want to look for someone who had a child in India in the 1880's.  Fortunately there is a very good search facility in Legacy, just <Cntrl F>
and this pops up:

You can search for lots of different options, particularly in the detailed search.  I tried 'birth place, India", nothing.  Then "event-place" India, this pointed me to William Stewart Heard, b:1856 Ballymoney.  He was married in 1880 to Elizabeth Ellis, and was in India 28 Dec 1876 to 9 Jan 1879.
They had a daughter (Louisa) in 1879, born in Ireland.  The record of Louisa's birth is interesting:

So it was registered by the army, and William and Elizabeth were not married at the time.  This was an entry in the Army Register of Births, Deaths and Marriages, and Elizabeth is referred to as his wife.

So, how many children did Elizabeth and William have?  All together 8, 3 boys and 5 girls.
in 1900 what ages would they have been?

This does not really fit, as the youngest child looks about 1-2 yrs old.  Perhaps it could be the youngest son of William & Elizabeth.  If this is the case, the photo would be about 1905.