Continuing the series of Genealogy for beginners, lets look at census records.

Census records are some of the best records I have found when researching family history, because most census records give information about the whole family.   But not in Australia.   In this post I will try to send you in the right direction for your Australian census type research.


From 1971 to 1996 the ABS had a policy of destruction of the original census forms and their electronic representations, as well as field records. Prior to that it appears most material had been destroyed because of lack of storage facilities, and a fire.

If you think census takers have a hard time these days, take a look at one about to go on his route, which covered 600-700 square miles, in 1911.  The 1911 census was the first national census in Australia.


And the census was certainly different in the past: 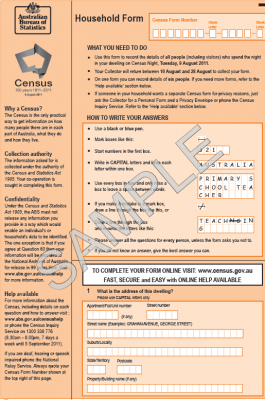 The 2001 census offered, for the first time, an option to have personal data archived by the National Archives of Australia and released to the public 99 years later, and in 2001  only 54% of Australians agreed to do so.  Looks like we will not have Australian census records for some time.


However, if you have relatives in the United Kingdom or the USA you are in luck!  In this post we will look at Australian Resources, then in further posts at United Kingdon, USA, and other countries, and at the end of each post some tips and tricks, so hopefully it will not be too confusing.

For a full history of Australian census check out the ABS website.
The first 'census' type records were called musters, and took place in the early days of the colony, to work out how much food was needed.  A great guide to these, and where to find them, can be found at WA State Library site .  for more detailed information check Convicts to Australia who have a very comprehensive list of musters. These run from 1790 to 1911.  Note: free men could not be compelled to go to a muster, so names may well be missing!

1841 Census - An indes of this can be searched online at the NSW Sate Archives site and there are 9354 entries in the index, some of them are not legible.

1891  Census - these records are at the NSW State Archives on microfiche.  Only the householders name is available, the rest of the people living in the house are not there.

Tasmania - 1837, 1838, 1842, 1843, 1848, 1851, and 1857.   Some are available at Tasmanian Archives. Most of the individual returns (the forms recording details of each household) have not survived.  These returns have been indexed by the name of the head of the household. Note that returns for many areas are incomplete, and the information recorded varies from year to year.  - It's worth a try though!

So, in Australia we need to go to some resources other than census records.

Electoral Rolls
These list the names of anyone registered to vote, so are not as comprehensive as census records, A guide to electoral rolls is a fantastic resource, as it tells you where all the Aust. Electoral rolls can be found.  Some are on Ancestry.com & Find my Past.com - but not all of them.

Other Records
As there are very few census records, we need to look beyond them to try to locate ancestors.  For a comprehensive list of where Land Records and Directories (eg. Sands) are held click here.
Newspapers can be a source of birth and death information, but often contain the names of several family members, and where they live - search Trove.  Police Gazettes can be found at State Libraries, some are on Ancestry, Find My Past, and Trove.