Queen Victoria was on the throne, and Charles Darwin died the year Daisy was born in Surrey in 1882.  Carshalton, where she was born, was a rural area at the time, and Daisy was Christened at the local All Saints Church along with her two sisters Theresa and Clarissa. The Church appears to have been at Carshalton since at least the 11th Century.


Her mother Alice Zealey came from a large Surrey Family and was only 17 when she married Obed La Farre in 1878, Obed was 25 years her senior (42 years of age).  Obed had been married before but his wife had died 17 years earlier.  Obed was born Obed Farr, but appears to have changed his name to a stage name of La Farre to gain more work as a bandmaster and musician.

Daisy grew up without a father it appears as her mother and father are never listed together in any census.  However her father is listed as living nearby sometimes.  Obed probably moved around a lot for musical work and Alice was a charwomen but why they never lived together I have never found out.  So Daisy grew up in a female household.

In 1895  the family had obviously fallen on hard times as Obed was in the Epsom Workhouse where he is listed as a "skinner".  A skinner was either a dealer in hides or a mule driver.  He was in the workhouse in  February and then again in November of 1895 when he is listed as dead.   People often went to the workhouse due to illness in this period.

By 1900 Daisy was 18 and possibly not living at home.  Her mother went into the workhouse in January 1900 and died there in February aged just 45.  By that time she had remarried to one Albert Henry Herbert Bexley, and had one son Francis in the year 1900.  These clues lead to the conclusion that she may have died due to complications in childbirth, a sad but all too common occurrence. 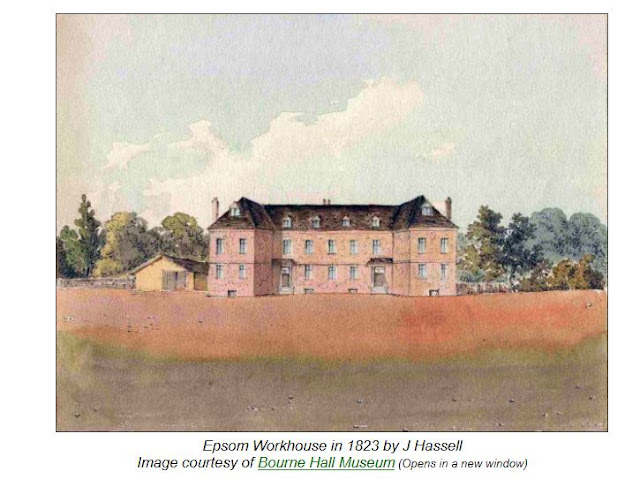 Sometime around this time the three sisters, Theresa, Daisy and Clarissa moved to Cheam in Surrey to work at the fireworks factory.  I know this from the 1901 census information.  Theresa (21) and Clarrisa (15) are living at 3 Crown Road, Button, and Daisy is boarding at Fawn Cottage.  At the same time William Stewart Heard was a 'potsman' at a pub in London picking up empty glasses.  William must have moved to Cheam soon after to work at the fireworks factory, and that was probably where he met Daisy.

The Brock's fireworks factory came to Cheam in 1901.  Founded in London in 1725, Brocks produced rockets, roman candles and special set piece fireworks for displays. They moved to a 200-acre site in Cheam in 1901, and continued manufacturing there until 1934.  Some photos of the girls working there from this era remain (below) 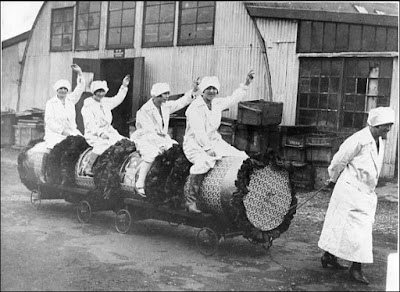 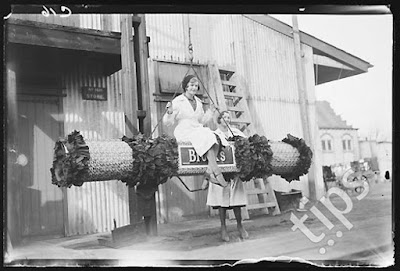 William and Daisy probably met at the factory as they married  at St Nicholas Church, Sutton on 12th October 1902.  It seems likely that Daisy had her sisters as bridesmaids, but beyond that nothing is known about the wedding.  Wedding dresses of the day still looked quite Victorian and were expensive, so perhaps Daisy simply wore here best outfit for the ceremony.


There first son (also William Stewart) was born in 1903 at Upper Hale in Surrey, where William's parents were also living.  William Snr was a labourer at the time.  In 1907 a son Cyril was born and in 1908 a daughter Daisy Lilly, but Daisy appears to have died the same year.  Then in 1910 another son Lesley Frank was born.  Cyril and Lesley were Christened in 1910 and William Snr is listed as a Carman at the time.

Between 1912 and 1915 the family lived at a cottage owned by Brocks Fireworks in Gander Green Lane, Cheam.  It was not uncommon for large factories to build accommodation for their workers.  In 1912 A son Reginald Ernest  was born in 1912.

Sometime in 1914, after WW1 was declared,  William joined the Army, his army records do not appear to have survived except for medal cards.  Two important pieces of  euphemia survive however.  A series of silk postcards sent from France to Daisy and a postcard from William.  Read more HERE

So Daisy is left with 5 young children to bring up while her husband is in the army, and in 1915 another son is born, Frederick Walter, and 1917 Ronald Godfrey.  Daisy appears to have moved out of Cheam as the children are Christened in the Sutton area.
The family left in England had to cope with the effect of the war that led to inflation, and many poorer families could not afford the increase in food prices. The impact of the German U-boat campaign also led to food shortages and this hit home when rationing was brought in by the government in February 1918. As nearly everything was directed towards the war effort, fuel was also in short supply and this was also rationed.The Germans also attacked Britain itself. For the fist time, civilians themselves were targeted with bombing raids by Zeppelins and coastal raids by the German Navy.

1918 saw the end of WW1, so around that time William would have come back to the family.  I can imagine Daisy would have been so happy, firstly that William had survived, and secondly that the family could begin a more normal life.  But the end of WW1 did not witness a swift return to pre-war 'normality' for the British economy. More British than German workers were involved in strikes in 1919. Unemployment in 1921 reached its highest point (11.3%) since records had begun. Staple wartime industries - such as coal, ship-building and steel - contracted. Working women were forced to cede their jobs to returning soldiers.

In 1920 a daughter was born, Sylvia Lillian Irena,  it must have been a cause for celebration after 6 sons and the death of little Daisy.  The family were living at Farnham.  It was at this time of labour unrest, high inflation, higher taxes, high unemployment and  social upheaval that the family decided to emigrate.

After WW1 the British Government offered ex-servicemen free passage to one of the dominions or colonies and 17,000 arrived in Australia between 1919 and 1922.  The Heard family was most likely one of them.  At the same time church and community organisations such as the YMCA and the Salvation Army sponsored migrants. Small numbers also arrived independently.

On the 5th of October 1922 the family set sail from London for Australia aboard the Barrabool.  The ship was a Twin Screw Steamer built the year before and was part of the P & O Line.  It was described in the papers of the time as "These steamers are fitted with all modern appliances, and carry only one class of passengers" and we know that included among the passengers was a group of "domestic helps are  to arrive by the Barrabool, under the auspices of the Salvation Army".

I have no idea where the family went on their arrival in Australia, mum never talked about it (she was only 2!) and no records seem to exist.  One of William's sisters, Elizabeth had by this time married William Moss and that family had immigrated 10 years earlier to Australia and lived in the Sydney area, so perhaps they boarded with them.

They arrived at good economic times in Australia, but  between 1930 and 1939, Australia’s development almost stopped. The productivity of farming and industry declined. There was almost no migration to Australia and fewer babies were born between these years.  By the late 1930s, the economy started to recover with people getting jobs and factories producing more goods. But the Great Depression had produced a lot of suffering.  My mother told me stories of having bread and dripping for dinner because that was all the family had in the cupboard.  Sylvia went on to gain her Leaving Certificate, the equivalent to the H.S.C. now, which was quite an achievement for a woman in those days.

By 1930 the family were living in Auburn, and William was working as a wards-man at Auburn Hospital, his sons William & Cyril were dough mixers (bakers), possibly working for Arnotts and the rest of the children were most likely at school.  Over the next ten years all the children married, but mostly continued to live nearby in Auburn.

In 1940 & 1941 three of the brothers, William, Reg and Fred joined the Army.  They were all Sappers and were all in Egypt.  William and Reg returned, but Frederick Walter Heard from the 2/13th Field Company died on 1st of September 1942 at El Alamein.  My mother, his sister Sylvia was heartbroken as I am sure her parents were, what a terrible day that must have been.  Daisy must have lived in fear that she would lose more of her sons to the war.

On Anzac day 1943 Fred's brothers covered his grave with wattle (pictured below) I have often wondered where they got it from.

In 1944 Daisy's husband William died leaving Daisy on her own.  Her daughter Sylvia, who had one daughter, had separated from her husband by this time and was probably living with Daisy.

At some point before the 1950's Daisy moved to Fairfield, where her son Reg also lived, then in 1959 she died and was cremated at Rookwood.   I was only 4 at the time and don't remember her passing, but I do have memories of the home at Fairfield and sitting around a large table with the family while they sang Irish songs while my mother washed up the dishes.  She had come from a poor English family and  raised a family of seven children, all who had gone on to have families and successful careers of their own in Australia.