The first of Crestleaf.com’s 12 Months of Fascinating Family Finds: June
POSTCARDS FROM THE FRONT
I  never knew my Grandfather, as he died before I was born.  I heard stories about him from my mother over the years and did have a couple of photos of him in uniform and some old postcards (more about those later).  My mother did not know anything about his service in the war, and all I had about it was a postcard with 16 signatures on the back of it, and 17 soldiers on the front.  I decided to try to find out a bit about him, starting with this postcard. 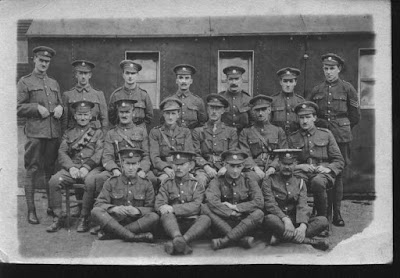 I had not done any family history research online, so I just Googled “help with family history/genealogy”.  Up came the Roots Chat Forum pages, and this became my starting point.  I scanned the postcard, front and back and posted it on one of the military forums.  This put me in touch with David P. Whithorn from The Great War Society, U.K. who did a full interpretation of the postcard for me.  I was bowled over by his great generosity and also his knowledge.

He was able to work out from uniforms that my grandfather was involved with horses, and confirm the time was WW1.  He had found a William Stewart Heard in the U.K. Army Service Corp using War Medal Index Cards and the ASC badge my Grandfather was wearing.  David was also able to tell me that the ASC did have mounted troops, and that William’s dress in one of my photos indicated he was either on his way to or had just returned from active service.  This was to be my first experience with the wonderful people researching family history around the world who are (in the main) generous and helpful to others doing the same thing.
The initials ASC jogged my memory, and I dug out some old postcards my mother had had.  Looking at them I realised they were silk, embroidered envelopes and inside were small cards written by William to his wife Daisy.  Each one of them (known as ‘Silks’) was a hand written expression of love from WW1.  William was obviously missing and in love with his wife, and this was his only link to her.   To made sure they are preserved and I had them mounted and conserved for future family historians to look at and shed tears over. 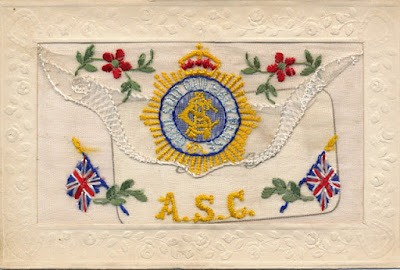 When I found the Royal Army Service Corps history I found that they had sometimes been referred to disparagingly as the Ally Sloper's Cavalry.  In fact, they are the unsung heroes of any war as an army needs to be fed, and supplied and cannot fight without ammunition and equipment.  During WW1 the British Army was supplied from Britain, and much was transported using horses.  I have never been able to confirm that William served in France as well as being located in England, but he was awarded the 1915 Star, along with the British War and Victory Medals.

Many silk embroidered postcards were created by French and Belgian women to sell as souvenirs to soldiers posted on the Western Front, so this is where William may have been.  The postcards are quite beautiful, and have regimental crests or flowers on them.  I imagine that the soldiers did not indicate to their families what they were experiencing; sparing them the bad news, but what they did send back was from the heart.
The touching messages in the postcards led me to try to find out how William Stewart Heard and Daisy LaFarre met and fell in love.  Through UK Census records, we find William as a ‘potman’ in London in 1901 at the Crown and Anchor in Woolwich, and Daisy is living in Cheam and working as a firework maker.  The Brocks Fireworks factory was in Cheam from 1901 to 1930, and there are several photos online taken during this time, I often wonder if one of my Grandparents are in them.  Daisy was working there with her sister, but they were not boarding together in the same home.  By the 1911 Census William and Daisy are married, with 3 sons, and living in North Cheam.  William is a Carman  (I wonder if he is pictured below?) for the fireworks factory and I presume Daisy is at home looking after the family, so it appears they may have met at the fireworks factory and fallen in love.
In 1922 William and Daisy packed up their (by then) 7 children and sailed for Australia aboard the “City of Auckland’ settling down in Auburn.  Both worked at the Auburn Hospital, and I know some of my Uncles also did.  William died in 1944, aged 63, and this left Daisy to deal alone with their three sons who were away serving in WW2 in the AIF.  One of them, Frederick Walter Heard, died at El Alamain, Egypt.  It was a very sad time for the family, and hit my mother particularly hard as she was very close to her brother.  It must have been very difficult for Daisy, who was experiencing war from a distance for the second time in her life.

It was later confirmed that 17 men in the original postcard belonged to the Army Service Corp and several of them later were commissioned as officers in the Tank Corp and two of them were in the Supply Unit of Kitcheners 4th Army.  It appears that the photo was possibly taken at a depot in the UK, possibly Aldershot, and was taken in either 1916 or 1917, deduced from the fact that two of the people in the photo were not yet commissioned.
So much of what I know about my grandfather in WW1 is deduction, “probably conclusion” as opposed to “certain evidence”, but he is more real now, and those photos of him in his WW1 uniform are much more meaningful.  That one postcard photo sent by my Grandfather who was obviously missing his lovely wife, set me on a search for the rest of the family, and I discovered a rich and strong military history going back to the Charge of the Light Brigade in Crimea.

I thought I was researching genealogy, but in fact, I found myself becoming immersed in history itself, and I can tell anyone willing to listen about WW1 French Silk postcards, and how important they were to the men on the front and the women left at home. 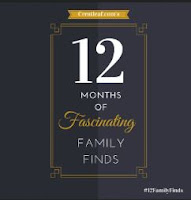