Oh my - A bigamist in the family!

Why it pays to keep a copy of everything!

I had forgotten about it until I found a petition from his Irish wife which included some information about when she arrived.  THEN I LOOKED AT THE NEXT PAGE!

This is what I found 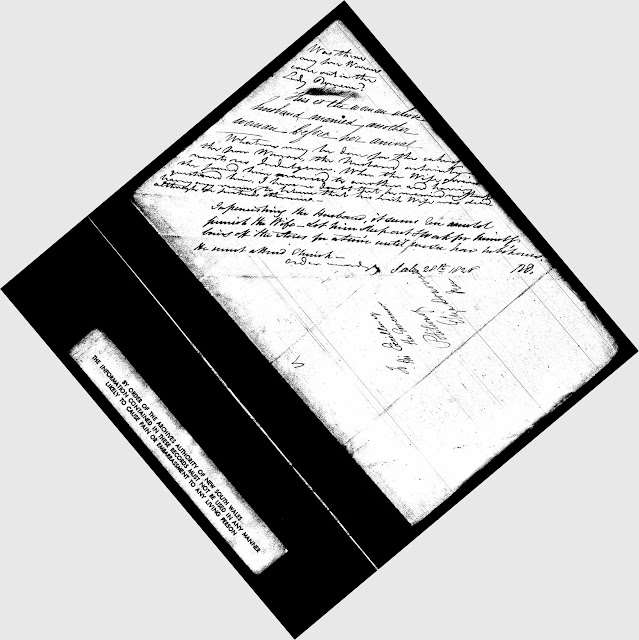 It's hard to decipher but this is what I have translated so far:

Was there any other woman came out in the Lady Rowena?

This is the woman whose husband married another woman before her arrival.

Whatever may be done for the return of the poor woman, the husband certainly merits our indulgence.  When the wife arrived she found him married to another and having questioned him, I have no doubt that he married [ileg] having [ileg] that his Irish wife was dead although [ileg].
In punishing the husband it seems we would punish the wife - let him sleep and work for himself being off the stores for a time until we see how he behaves.
He must attend church and [ or that under? ..ileg]
Date July 28th, 1826

So not only was he a horse thief, and a convict, he was also a bigamist!

More investigation is required about John Donovan, but  I am very glad I saved a copy of that document that was 'wrong'!  I really want to find out what happened to the poor 2nd wife.

Interestingly, John and his 1st wife Elizabeth were buried in two different places, John in a private cemetery at Mangrove Creek, NSW, and Elizabeth at Spencer Cemetery.

P.S. Many thanks to members of the 'Genealogy my ancestors came to Australia' facebook group for help in the transcription.