Two Great Uncles of mine. 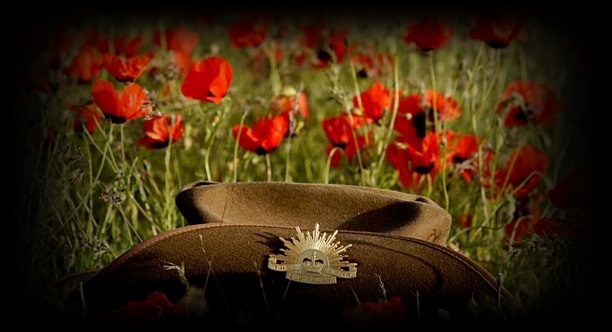 This Anzac day I want to tell the story of my Great Uncles, Patrick Joseph and John Harold Stettler.  They were not well educated, they were not well off, and did not cover themselves in glory in France.  They were just young boys who did their bit, and suffered the consequences. 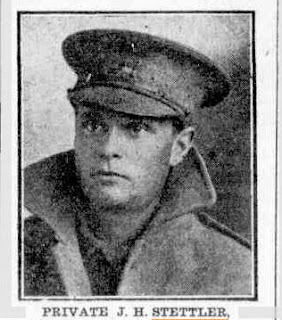 John joined up on 2nd Feb, 1916 at age 24, and was assigned to the 15th Infantry Brigade, did his training at Bathurst, then he embarked for active service just 6 months later, in August  1916 aboard the "Afric" heading to France.

(Hint: Check here and   check here for photos of troupships by the Aust. Army)

Patrick joined up a few months later, on 11th May 1916 and went to the 14th Brigade, 54th Battalion. Patrick's enlistment papers say he is 18yrs and 1 month old, but of course he was only 16.  He was sent overseas in December, with 7 months training, aboard the "Princess Henrietta". In England he was transferred to the 62nd Battalion and he joined them in France.

Patrick was in and out of the field hospital with dysentery in France, meanwhile John was in hospital for tonsillitis, but does not seem to have recovered as he was then admitted several times to hospital afterwards for 'debility'.  This appears to be a catch all illness covering many problems.  In August 1917 he was sent to the University of Southampton War Hospital, and in October sent back home to Australia with anemia.  He returned and was discharged medically unfit on 7th November, 1917, and from 1918 was given a war pension of PDS 1-10-0.

Patrick was transferred to an English hospital in April, 1917, then back to the front at Windmill Hill, Pozieres, France which was the scene of terrible trench warfare. In January 1918 he was shipped back to Australia and discharged for being underage.

I thought that was all I would find out about the Stettler boys until I was doing some searching on Trove.nla.gov.au.  There I found a diary written down by Patrick as dictated to him by John about John's time in the war.  What a find!

Two parts of the transcript (unaltered) stood out for me, firstly the beginning of the story:

Soldiers Diaries Parramatta No 1
The Battles of The Nations Composed by J.H.Stettler Written by P.G. Stettler Parramatta
Jan 10 1916
We left Australia on 1st/8/16 amid cheers and shouts for we were going to an unknown land to face danger some of us never to return again but we left with smiling faces we had a joyful time on the voyage we finally reached our destinstion after eight weeks we arrived at Plymouth after 12 hours travelling we arrived at our camp were we went through 3 weeks training orders were then received to entrain for France thence to Boulongne thence to Etables were we were given the taste of the actual warfare consisting of bully beaf strong tea and bullet proof biscuits it was very refreshing after travelling but we finally reached our battalion at beaue after a few days rest we were sent with our battalion to the lines 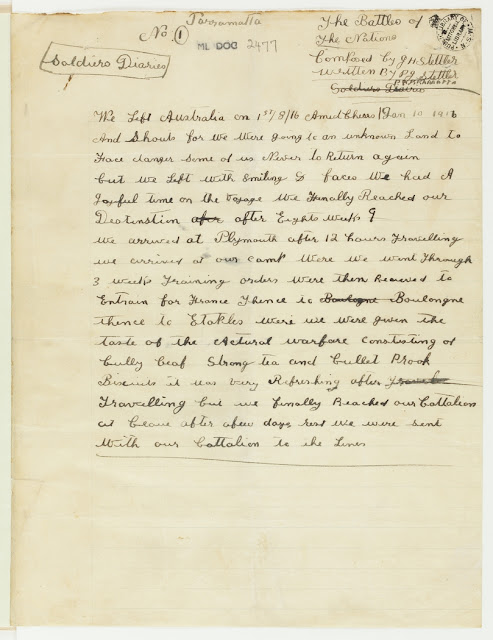 and the end of the story;

Page 10]
we left some of our men in the second trench Some of our Noblest mates to a Endless rest Some of them men who took Part in Eventful day in the landing at the Peninsula but are now unfortunate heroes who were loving to see it through and to do their Duty till the final day of victory came but such is war on arriving back we were obliged to make ourselfs Comfortably as possible but warned to be on the alert but little Could be had for the bursting shells at A about 2 oclock our Artillery gave Fritz a lively few minutes and we received word that our Relieving battalion had advanced Farther Later the heaviest bombardments from the commencement of the advance the heaviest guns were pouring in from three sides of Perfect deluge of shelling and Particular rough time for us advanced among Shrapnel men falling like Rain some wounded and killed outright and a vast number were put out of action a common Sight were Enemies are drawn together in heavy conflict with hand to hand fighting it was then that some of our bravest officers and men met their doom
The End Written By Pte p.g. Stettler Parramatta Composed by J H Stettler Parramatta N.S. Wales The End
[Transcribed by June Pettit for the State Library of New South Wales] 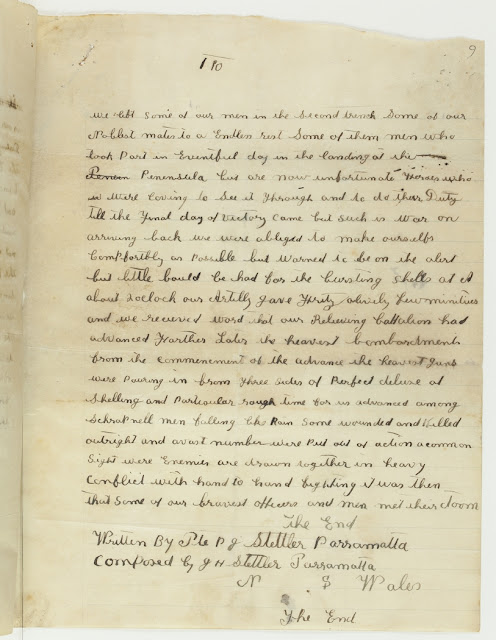 This may have been end end of the story of these two brothers in WW1, but there was a sort of transcript.  In  1918, after both of them were back from France, the two brothers got into quite a stand-off at the local picture theatre. The Cumberland and Argus Fruitgrowers Advocate (the local paper in Parramatta) reported that:

Patrick Joe Stettler vs. John Marsden and his wife  & John Stettler vs.John Marsden and his wife.    Patrick was with a Miss Clark and his brother at the pictures when Mr and Mrs Marsden sat next to them.  Patrick was telling Miss Clark about the treatment by the English of Australian Soldiers in France when Mrs Marsden said "You haven't seen France, You are a cold-footer."

There were several witnesses, as the theater was full and Mrs Marsden's remarks made many people take notice of them.  Mrs Marsden had apparently taken offence that Patrick was talking down the English.  Mr Marsden tried to apologise, but John threatened to hit him.

A few days after the incident Mr Marsden met the boys mother, Isabella in the street, and again tried to apologise.    In the end, Mrs Marsden was found guilty in both court cases and fined.

It appears that John was never the same after the war, he was often in trouble for fighting etc, and in one court case it is noted by a witness that "He is quick to temper because he has shell shock after the war."  I suspect he was just one of many that this happened to.

The Stettler family in Parramatta were well known to the police, with several incidents over the next few years.  Patrick was shot at the home (it seems they were drunk and playing around with a pistol), and various other petty incidents involving the two brothers. 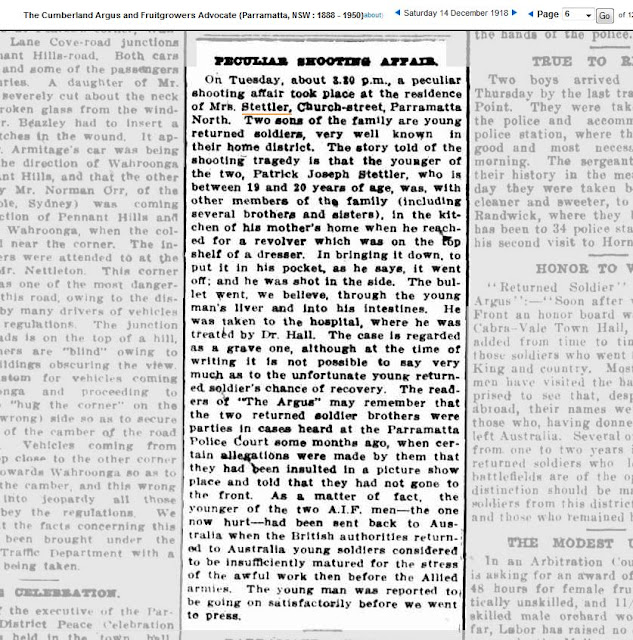 John does not appear to have married, but Patrick went on the mary Emma Catherine Elphic in 1941, only to divorce her in 1948.  Neither seem to have had any children.

As with many families, WW1 had an effect on individual young men that stayed with them and their families forever more.