Birds in the Newpaper archives

Trove regularly announces new additions to its newspaper archive, and one came out recently that had two entries on it that intrigued me.

I just had to go and look at them. 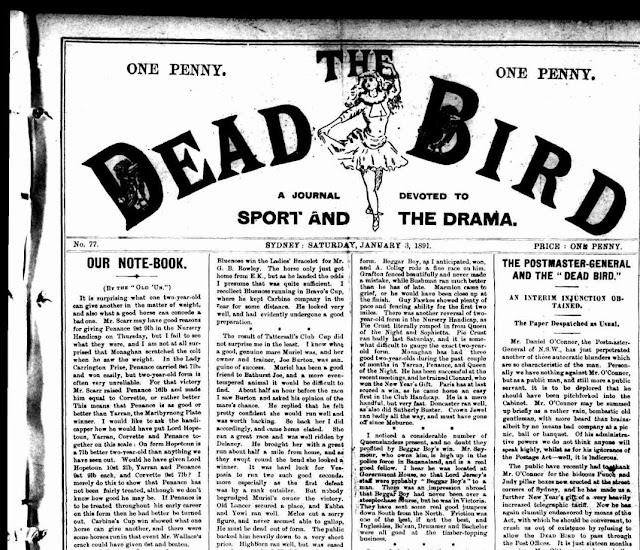 The Dead Bird  was the first of the newspapers, and it morphed into the Bird O' Freedom, and later to the Arrow.  Both are sports journals, with a liberal amount of prose.

The Dead Bird - a  Journal devoted to sport and drama, contained this little gem in it's last issue in 1891:

There was an old geezer of Weltham,
Who n'or bought any fish but she smelt 'em.
She would say, " I suppose
Those have all got soft roes,"
But she'd never believe till she'd felt 'em. 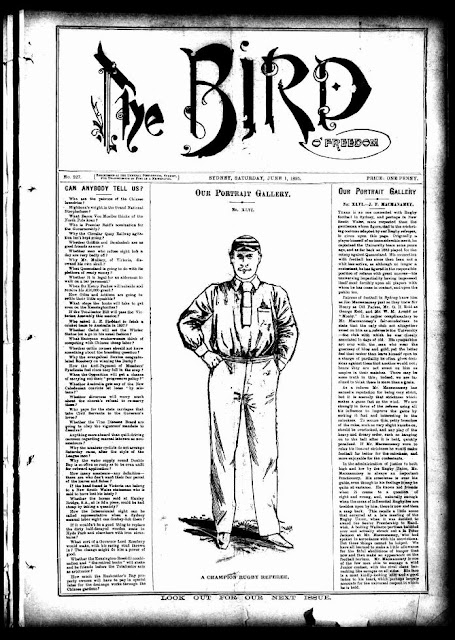 This is what the Bird of Freedom says, in its Christmas edition, 1894 about itself:


"The Bird has a broad and liberal platform.
It consists of one plank :
"Australia for the blooming printer,
and the x??x the hindmost."
Our crest is a kookaburra rampant.
Our motto, "Give 'em a good penn'orth
or bust."
Bird o' Freedom is not a party paper.
It takes no sides in politic. It tolerates
all religions and will always endeavor to
be perfectly fair and just to every cause.
Such be the case our utterances
upon political, social and general ques-
tons can he looked upon as the honest
opinions of those who write them, and
nothing more.
We do not deal in libels, but when it
is necessary in the public interest to
speak out straight, we will, continue to
do so.
" A spade is a spade," and no member
off this staff will be permitted to waste
reason and logic in the effort to prove it
a hay fork or a garden hoe.
We have boomed, we are booming, and
we expect to boom some more.
In conclusion, we again desire to wish
our fifty thousand weekly readers a safe
and easy recovery from their Christmas
festivities."

The paper not only covers sport, but politics and just plain 'stuff'. It's a great read! Take a look at this article from 29th Feb, 1896 about the bicycle craze in Europe:

One wonders just what the Price of Wales looked like on a bike!

If you have sporting ancestors, these two publications may help you (check the dates!), otherwise, they are a fantastic view back into the times.