In two minds, probably as my Uncle was.

I have thought long and hard about this post, as I have come across some family history I'm not sure the whole family would be happy about.  My grandfather, Augustus Clark, had a brother, Percy Hector Clark.  I heard about him as "Uncle Perc" from time to time.  I don't think I ever saw a picture of  him however.

Percy was in WW1, in France, so I set about obtaining his file from the national archives.

unknown Australian soldiers under shelter at Messines Ridge, 1917
Imagine my amazement when I found he had been court marshalled and sentenced to 10 years!  I do have a
vague memory of something my father said in the past, but as he is no longer here I cannot do any checking with him.  I did some further checking and found the transcript of the court marshal.

He enlisted aged 19 years 4 months,  and had been a cadet for 18 months prior.  By this time his mother had died and he was a plumber.  He did his training at Bathurst and was sent to France in February, 1917. 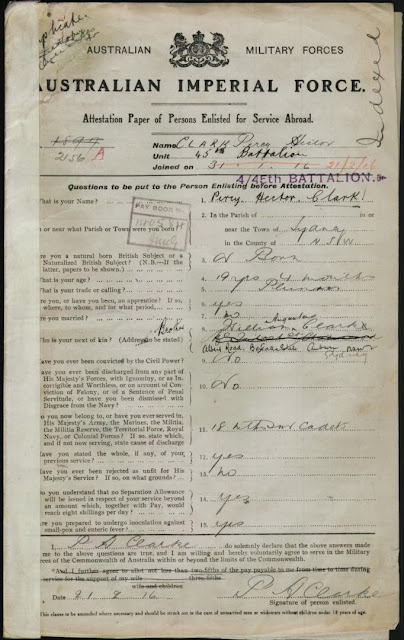 He was in the 45th Battalion, and was sent to France on the Wiltshire.   In August he deserted.   By November, he had be charged and convicted of desertion.  He was aged 20 at the time. 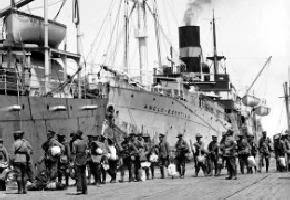 Firstly I wanted to know about desertion in WW1 by Aussie soldiers, and the Aust. War Memorial had this information:

According to Section 98 of the Commonwealth Defence Act 1903, no member of the Defence Force shall be sentenced to death by any court martial except for four offences: mutiny; desertion to the enemy; or traitorously delivering up to the enemy any garrison, fortress, post, guard, or ship, vessel, or boat, or aircraft; or traitorous correspondence with the enemy. Significantly, this sentence could not be carried out until it was confirmed by the Governor-General.

Whereas approximately 346 soldiers were executed by the British Army the First World War, this sentence was not carried out by the Australian Army.

After the dreadful bombardments of Pozieres in 1916, absence without leave increased alarmingly. Growing concerns over this issue saw some senior Australian officers urge that Australian soldiers should face the same sanctions that applied in the British Army . However the general feeling, both in Australia and in the services, was steadily against the infliction of a death penalty on men who had volunteered to fight in a cause not primarily their own.

Consequently, the AIF had to rely increasingly on the leadership and example of its officers and NCOs, the tone and esprit de corps of its men and the substitution of other penalties – including, ultimately, the publication of lists of offenders in the Australian newspapers.


In 2006 the Australian deserters who had been shot were pardoned by the English.  One thing was clear, the Australian attitude was that these men were Australian voters, volunteers, and not fighting for a cause that was Australia's, so the English were not going to execute them.  In fact, by all accounts the English officers did not like the Aussies, who were not class conscious, and not inclined to give respect to someone simply because they were an officer.

This is how WW1 was presented to the Australian people:

It is my melancholy duty to inform you officially that, in persistence by Germany in her invasion of Poland, Great Britain is at war, and that, as a result, Australia is also at war...


My next step was to find the war diaries of the 45th brigade at the time Percy deserted, below is a picture of them, for the relevant time.   This may help with the identification of place names in the transcript of the court marshal, and general knowledge of what was going on. 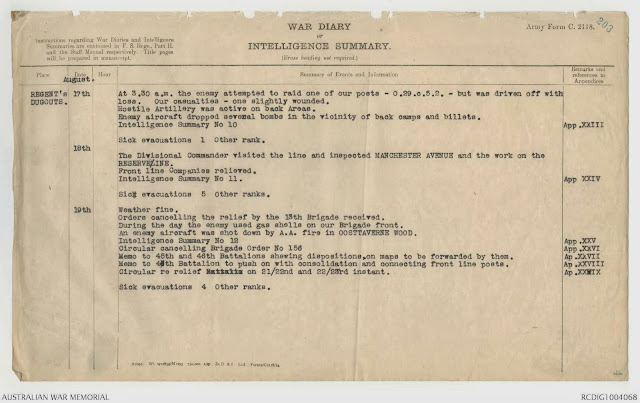 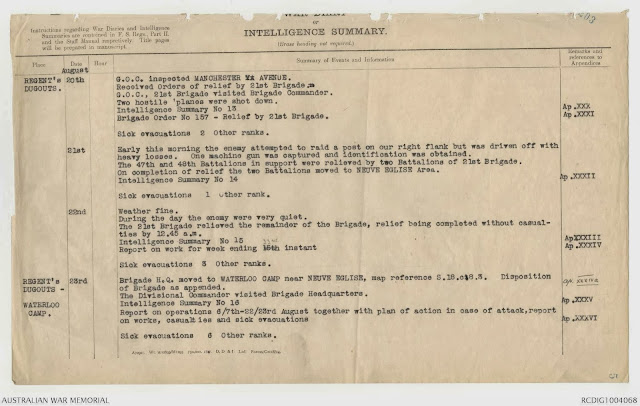 Reading through the transcript of the court marshal was quite harrowing.  Several people were called who said Percy was with the troup, and then when he was not.   The entire defence by Percy was as follows (some of the information is illegible, mostly place names {XX}).

Percy was sentenced to 10 years, but this was commuted just after the court marshal to 2 years, and he came home. During this time he is listed as ill with "swollen lymph glands", most likely this was TB, and was hospitalised because of the disease. By September, 1918 he was invalided to the UK hospital. By December, 1918 he was sent to prison in London. In May 1919 he left for Australia.

Sometimes deserters were named in the Australian newspapers, but this does not appear to be the case for Percy.  He never married, and died on 22nd July 1928, aged just 32.  This simple notice announced his death: 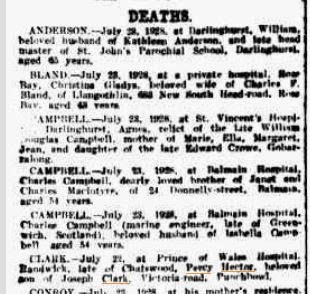 How can we judge his actions today?  I look at my own son, and remember him at aged 20, he was just a kid starting out in life, in no way ready for something like WW1 in France.  It appears pretty clear he had shell shock, like many in WW1.  All I feel for my great uncle Percy is a kind of sadness, and I wish I had known him.

I leave the final words on this to James Connolly, an Irish social leader of the time:


“It would be well to realize that the talk of ‘humane methods of warfare’, of the ‘rules of civilized warfare’, and all such homage to the finer sentiments of the race are hypocritical and unreal, and only intended for the consumption of stay-at-homes. There are no humane methods of warfare, there is no such thing as civilized warfare; all warfare is inhuman, all warfare is barbaric; the first blast of the bugles of war ever sounds for the time being the funeral knell of human progress… What lover of humanity can view with anything but horror the prospect of this ruthless destruction of human life. Yet this is war: war for which all the jingoes are howling, war to which all the hopes of the world are being sacrificed, war to which a mad ruling class would plunge a mad world.”