The luck of the Irish pays off, finally.

When I was quite young I can remember going over to my grandparents house, on my mothers side, and having Sunday lunch.  Mum and Nanna would slave in the tiny kitchen in Auburn and we would sit around a big table with all my uncles.  I always loved the apple pies.  There would always be singing, and although I don't remember what the songs were, somehow over the years I have found Irish songs very familiar to me.  I thought it may have come from these lunches.

Well, I have been searching for the birthplace of my great great grandfather, William Stewart Heard, and finally I have found him.  I took the plunge and took out a subscription to Find My Past, just on a short term basis.  I found William in the Chelsea Pensioner records, there was his sign up papers for the year 1876.  Listed was his age, 19 years 8 months old, and his place of birth.  Ballymoney, County Atrim, Northern Ireland.

He signed up for the 4th (Queens Own) Hussars, and his soldier number was 1515n.  There was his signature, written in a strong hand.  What a find!

I  have quite a bit of information about his whereabouts in England in the early 1900's, but not much before then.  Judging by where his children were born, I think he worked for the army in Scotland, India and England.

The funny thing was, only 2 days after I had found this, I was contacted by a cousin I did not know about in the US who had found this information just about the same time as me.  She got a link with my tree on Ancestry and contacted me.   Then about 2 weeks later, the same thing happened, but via a post on Roots Web, from another cousin in England.  The Heards are all over the place.

Serendipity, it has happened more than once, and new records are going online all the time, so it pays to keep checking.

Those digital images of pieces of paper from 1876 - now they're gold! 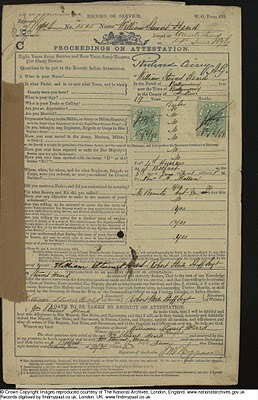 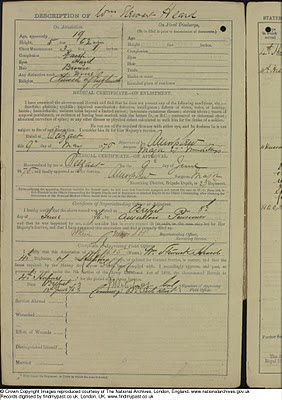