Who was the elusive Patrick Stettler?

One of my most elusive ancestors is Patrick Stetter. 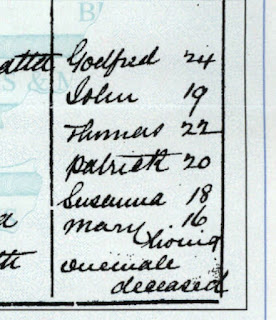 It is only from his father's death certificate we know that Patrick was 20 years of age in 1882, which makes his birth date about 1862.  His birth does not seem to have been registered, unusual as his family was living in Parramatta at the time and civil registration was required.

This leads me to another topic.  How do you put in dates like this?  I use the following system:
If you have a better system, put it in the comments section of the blog, this one works for me but the main point is that I know what each one means.

The next piece of evidence about Patrick is this advertisement that appeared in the Sydney Morning Herald:

This was placed by his mother in 1877 - so Patrick would have been about 15 years old. Who was this Daniel Kelly?  When I read it I was shocked at first, but some consideration about the times is required.

Firstly the family was not rich, his father had been in and out of gaol from 1860-1870's.  His father's occupation was a sawer (hand sawer), so he probably worked at a saw mill or he may have moved around with logging crews.

Patrick's father died in 1882 (5 years earlier) so the family was probably dependant upon the sons working, and age 15 was not unusual for boys to be working.  So did Patrick go with Daniel for work or was there another reason?  So far no more information has come to light.

The only possible death information comes from the Aus. death index for  Blayney in NSW in 1941 when a man called Patrick Stettler died - but is it my Patrick who would have been 79 at the time?  His father's name is listed as John which is the name his father used (it was actually Gottlieb Johan Theophil Stettler). So it is possible, but there is minimal evidence.

So despite searching newspapers and cemetery indexes, Patrick Stettler remains a mystery.