My most elusive ancestor

Captain George Fisher was a Ships Master (Captain) who sailed between England and the U.S.A. in the mid to late 1800's.  He married Jane Grayson in Liverpool in 1833, and one of their 6 children was Thomas Grayson Fisher - my most elusive ancestor. 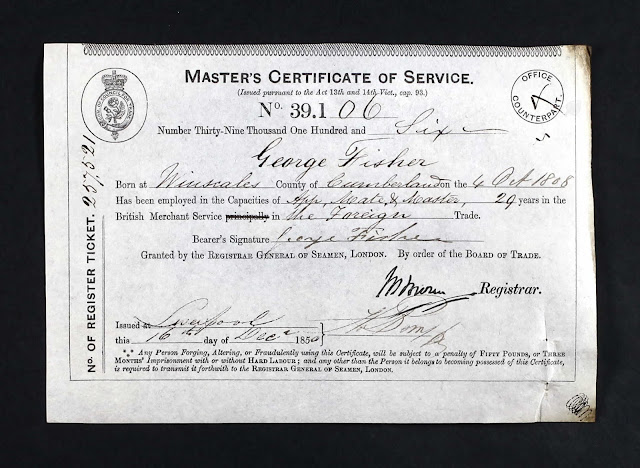 Thomas's father must have been absent for much of his early life as he was in the Merchant navy from 1821 - 1850 when he obtained his masters Certificate.  From records we know he was at sea in 1851 for the census and his son Thomas, then aged 13, was a pipe maker.


Sometime after this Thomas took the job of apprentice seamen aboard the Heather Bell, a clipper that transported gold from Australia to London at that time.   On 30th May 1857 Thomas left the ship and never went back again.  The Heather Bell was built in 1855, a wooden clipper owned by the Orient Line.  The ships Master was Captain Willian Harmsworth, and it is not a stretch to think that Thomas's father probably assisted in getting him aboard.  What a disappointment he must have been.
He was one of many that jumped ship in Sydney in the 1850's but was not the only one who deserted that day, as the following report in the Government Gazette shows: 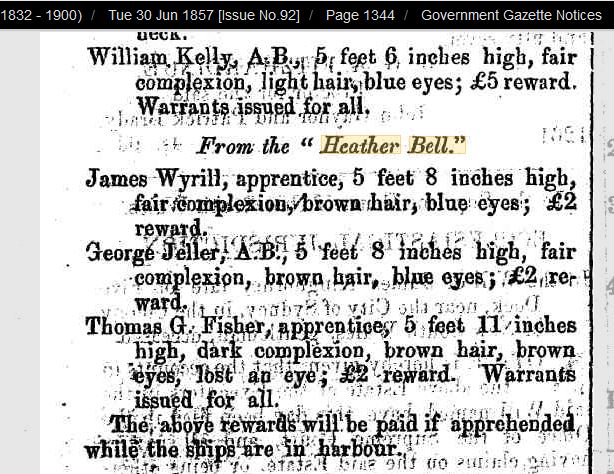 Thomas was never apprehended, and like many others, probably went 'bush', staying away from Sydney and the troopers.  He is listed in a police report at Wee Waa in 1858 as absconding from a job with Charles Wentworth Bucknell of Mogyer.


The next thing I know of him was when he married Susan Ann Stanway in Sydney in 1865.  Every newspaper in New South Wales seems to have carried an announcement of the marriage.  This is probably because Susan's parents seem to have been  well respected in the community, but their daughter at the age of 18yrs had a child to Thomas Grayson Fisher in 1862 who was now 3 years old. 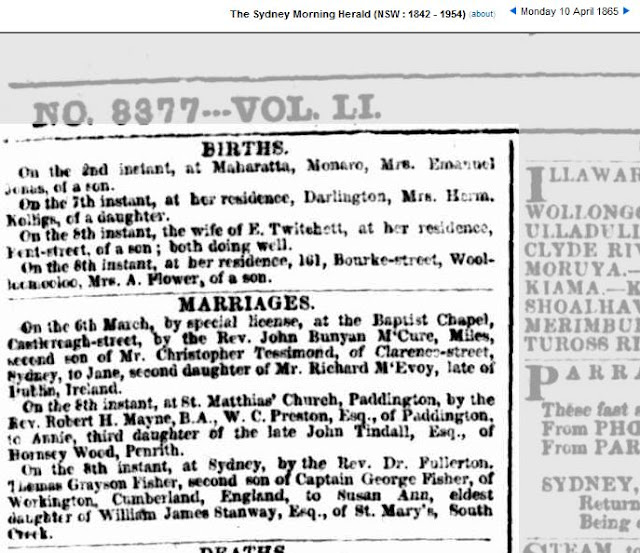 Susan's father had died 11 years before her marriage, when she was only 12 years of age, and I suspect her mother disapproved of Thomas Fisher because they did not marry until Susan was of age (21) despite having a daughter Isabella  (who was my grandmother).  When Isabella married many years later she listed her father as a Station Overseer, so he may have left the family and gone 'bush' again.

I have found nothing about Thomas Grayson Fisher after his marriage, until I found him in burial records at the Goodooga Cemetary, Brewarrina, New South Wales.  About as far from Sydney as you can get and still stay in the state.  He appears to have died on 29th December, 1893.  There are two other people named Fisher buried at the historic cemetary, William Fisher born abt. 1835, died 1885, and Ester Mary Fisher born abt 1870 died 1953.  Neither of them have parents listed on the NSW BDM. Thomas's wife Susan lived to age 81 and died in 1925.

So what happened to Thomas Grayson Fisher after he married Susan Ann Stanway in 1865 and were these two people also buried at the cemetery related to him?  If so, who was their mother?  Maybe the only way to find out is to travel to the cemetery and see if there is a headstone or a family history group in the area that might have more information.

Thomas Grayson Fisher had an absentee father and appears to have become one himself.