This is the story of how I found my Uncle as a POW in WW2, and one little known archive.

Are you researching Australian military records?  Click here to find lots of links to information.

I found this postcard among my fathers things after he died.  It is a postcard sent to my father (Ron) from his mother during WW2, which he kept all his life.  It reads  "To Ron from mother for a happy Xmas 1934.  Brother Edward Stalag X111C Gerry.  Received at Guys Post 9/12/43." 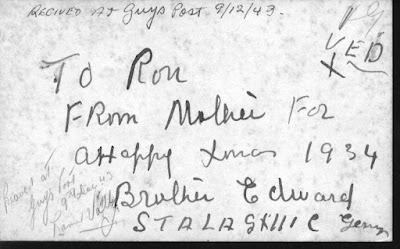 How dreadful it must have been for my grandparents to know that Uncle Eddie was a POW.  Somehow though, they had a photo of him, which was on the front of the postcard.  Here it is  (I think my uncle is on the far left second row): 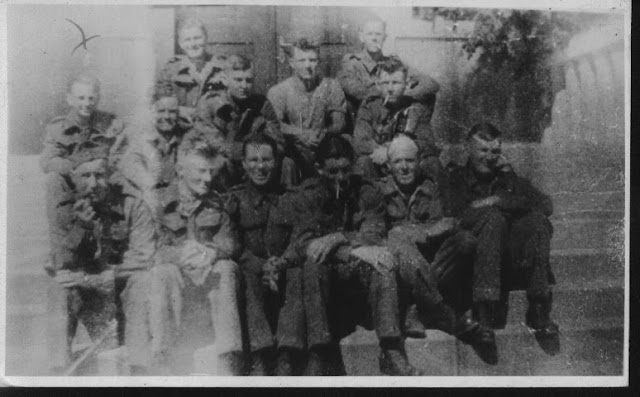 I have no idea where or when this was taken, but this photo sent me on a journey for his records.

At the time, only one entry, (No2.) was digitised.  Looking through that file was harrowing.  It contains accounts of war crimes committed, mostly at Singapore, by Japanese soldiers.  The Edward Clark was not mine however, as the account was from Horace Edward Clark.  He was a POW from 1932 to 1945 and he gives information on the treatment and death of his fellow inmates.

Here is what the archives tells us of the Australian War Crimes Commission: "As the war against Japan in the Pacific began to turn in favour of Australia and its allies, evidence was beginning to come to light of Japanese mistreatment of prisoners that included episodes of ill-treatment of prisoners of war in labour camps, the massacre or execution of captured allied servicemen, local inhabitants or civilian internees, and widespread acts of assault, torture and murder. From 1943, the Commonwealth government investigated the allegations of war crimes with a view to putting the perpetrators on trial once the hostilities of World War II were over."

Between 1945 and 1951, 924 enemy nationals were tried for war crimes in 296 trials conducted by Australian military courts.  Of those found guilty by these trials, 148 were sentenced to death and executed. An additional 496 were given prison sentences.

It was clear to me that entry No 3 was my uncle because I knew that his mother was Lillian and that the family had been living in Katoomba.  The Access status on this entry was :Not yet examined.  That meant there was a good chance of having it digitised.  So I requested a copy.

At the time it cost be about $25, and after several months the file was available online, and I had received a photocopy of it.  Now it costs considerably more and photocopies are not sent, it is only made available as a digital copy.

The first page in the file is a form commonly found in Australian military files, the Attestation form. 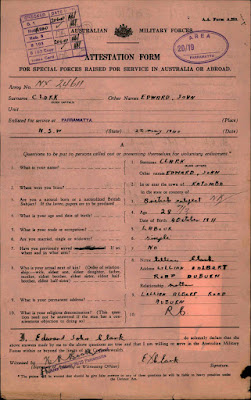 This gave me a lot of information.  Firstly it told me his full name and army number, important information when researching Australian military documents as many will be searched via the Army number, and this name was how he was known in the army records.  Secondly it told me where and when he enlisted and his age, when and where he was born.  That confirmed the Date of Birth and location I had for him.  He enlisted when he was 28 years old.  His occupation is listed as labour(er) and he is single.  His NOK is his mother Lillian, living at Albert Road Auburn.  I found this last piece of information unusual, as  he had married 5 years earlier.  I wonder why he did not put his wife as his NOK?

His religion is Roman Catholic, and he signed his name as E Clark.  He was in the 2/1 Australian Infantry Brigade, enlisting in 1940.

The next page had a photo of him, a great find!  - see below

The next two pages are entries of his service record, hand written and quite hard to read in some cases.  He spent some time at Greta, NSW training, and then went to the UK, then Palestine, Egypt and Crete.  On 12th June, 1941 he is listed as MISSING IN ACTION, transferred to X list, then on 11th November 1941 he is listed as Officially reported prisoner of war.  Place of detention Stalag X111c.    He was prisoner of war No. 09756.

I found this photo of stalag X111c on the NAA site: 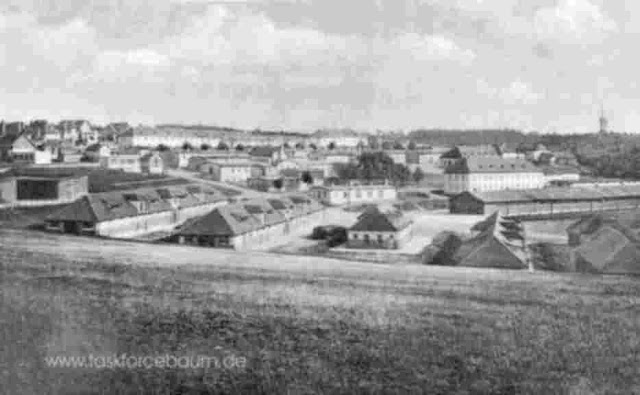 What happened to him as a POW is unknown until 22nd May 1945.  He is listed as "Recovered P.O.W. arrived UK ex Western Europe".  After this he was held in a IAIF Transit Camp in the UK until he could be sent home.  He disembarked in Sydney on 24th July, 1945.  His family had not seen him for five years.  It may be that the postcard, given it could have been taken in 1943, was taken at the POW camp.

What of the remaining 2 entries on the NAA site?   By clicking through the last one on the list, I found it is an immigration file, so unlikely to be what I am looking for.  The first one however is a Prisoner of War Trust application, so may be my Uncle.  I have applied for this to be digitsed, and as it is an Open Access file it should be available in around 3 months.

Recently via one of my Facebook genimates, I learned yesterday that the University of Melbourne holds the Australian Red Cross cards for World War II until 1973.  They’ve now been digitised and indexed and can be seen on the University of Melbourne’s Archives site.    There is a wonderful blog post about the records, written by one of the Senior Archivists, Fiona Ross -  here.  To search the collection simply go to search and type in the name or military number of the person you are looking for.   I found my uncle's card.  Not a lot of information on it, but another piece in the puzzle confirming where he was a POW. 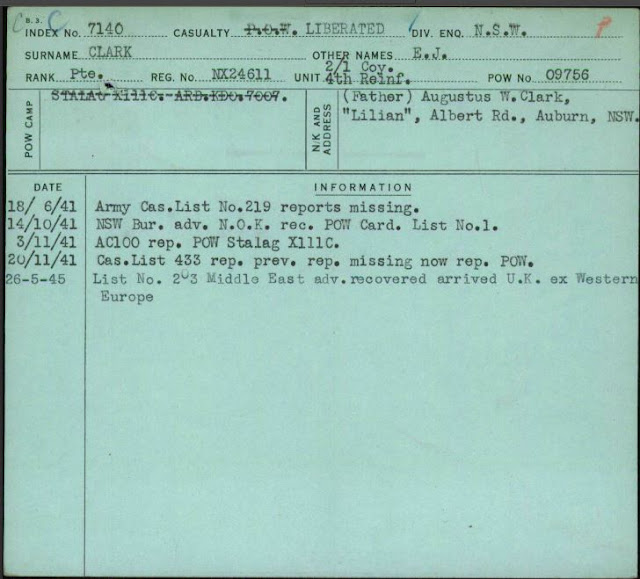 A couple of hints about searching the site:


From here I went to the Australian War Memorial, but a search found no records available there.  But I did find something of interest!  If you have a family member on the WW1 roll of honour  check to see if they have a Roll of Honour Circular, and click to view it.  I found one for my G Uncle, Herbert Holman, and found out he "had completed a 26 mile marathon foot race  at Freemantle and finished 5th and won a trophy."

I remember my Uncle as a quiet man, who never seemed to be in great health.  He married my Aunty Molly who was a wonderful cook!  They had 3 children, cousins I grew up with who were quite a bit older than me.  Edward John Clark died on 24th May 1981 aged 69. 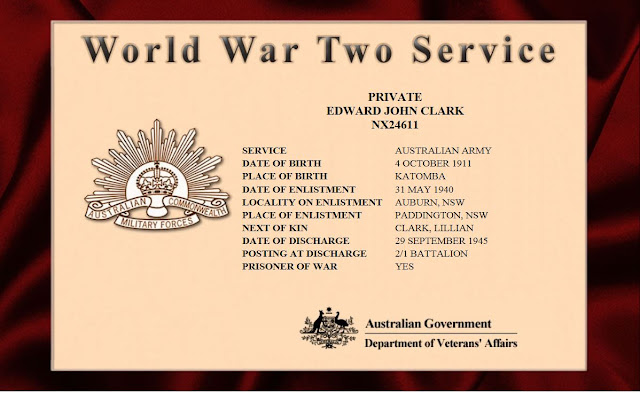 Here are my top sites for researching military records