I was on the SMH Archives site and saw this photo: 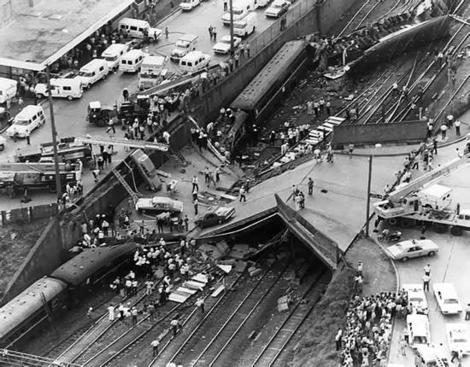 I'ts a photo of Australia's worst rail accident, Sydney's Granville train disaster.  83 people died, and 210 were injured.  It certainly brought back some memories for me.

On the day it happened in 1977 I was running late for work and caught a later bus from Lane Cove to the city that day.  At the same time, my sister was starting a new job in the city and had caught an early train (as it was her first day) that was going to be heading through Granville.

I knew nothing about the disaster, as I alighted from the bus at Wynyard station, but just caught a glimpse of my sister coming out of the train station heading to her new job.  I was too far away to catch her eye, despite waving, but I knew it was her.

The minute I got to my desk I heard about what had happened, and people were heading to the blood bank.  I knew my mother and father would be frantic, and unable to contact my sister as they would have no phone number for her yet.  This was the days before mobile phones, being 1977.  I phoned my mother immediately to let her know that I had seen my sister coming out of the train station - alive and well.  I could hear the relief in her voice.  Later we found out she had been on the train that went under the bridge before the one that hit, she had a lucky escape that day.


In all the years my sister and I worked in the city I never once saw her traveling to or from work again.  Spooky things do happen.  It was a shocking few days, with many people traumatised, I hope we never see anything like it again, but it will be part of Sydney's history forever.