Digging into the Gilgai's history - we stole the ship!

If you have not read the previous post, A Peak into the Past and a Very Touching Story, do so now or this will be too confusing.
To continue the story of the postcards ...............

She became part of the Australian Commonwealth Line, which came in to existence to serve Australian needs during WW1 due to the absence of shipping to move the wheat and wool Australian had that was acquired by the British.  In fact, she was an ex-enemy ship.  (Or as my husband put it "So we stole the ship?").

I wanted to try to date the voyage mentioned in the postcards, wehave some clues-
I started by searching newspapers on Trove, and found an entry in the Adelaide Daily Herald of 24th December, 1915 of the ship leaving Port Adelaide for Boston on November 13, 1915.

This turns out to be a very useful book if you are researching voyages to/from Australia.  It contains a wealth of information and where to obtain even more information from.  It also contains another list of references that would be very useful. 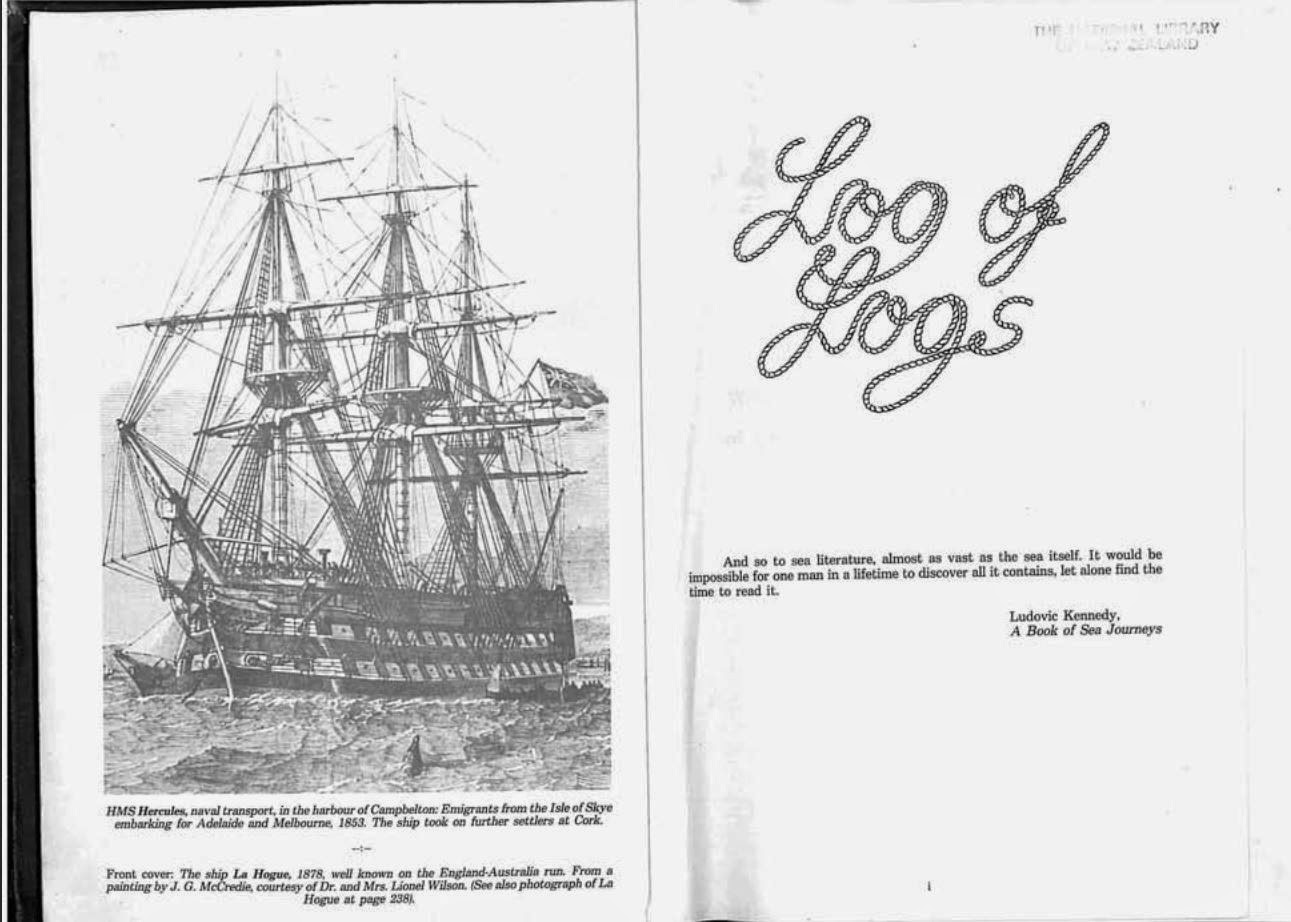 So this find took me to the Australian War Memorial, where the Official History of Australia at War is online - 12 volumes for WW1 alone!  What a fantastic resource for us to use.
Here is what the AWM says about the books :

The Official History of Australia in the War of 1914–1918 is a 12-volume series covering Australia’s involvement in the First World War. The series was edited by the official historian Charles Bean, who also wrote six of the volumes, and was published between 1920 and 1942. The books, with their familiar covers, “the colour of dried blood” in the words of one reviewer, rapidly became highly regarded internationally. Bean’s work established the tradition and set the standard for all subsequent Australian official war histories.


After using the wonderful <Ctrl F> and going through several volumes, I finally found this entry:


GILGAI.  Formaly the Hansa Liner Windenfels captured at Port Phillip Heads on the 18th of August, 1914.  Employed by the Navy Department as a cargo carrier, she left Port Pirie on the 8th of March, 1915, with a full load of ore for Galveston, via Durban, and returned with wheat from Bahia Blanca.  Then, after another round trip to America, she sailed from Albany at the end of August, 1916, with wheat for Naples, which she reached by way of Durban, St Vincent, and Gibraltar-on the 29th October.  Thence forward she carried, besides foodstuffs from Australia to Europe, coal from Calcutta to Australia (during a coal strike), and paper from New York and Botwood (Newfoundland) to Australia.  On the 1st of May, 1918 she was transferred to the Commonwealth Government Line.

So this confirms she was an Ex-Enemy Merchant ship, captured and put into service for the Australian Navy.  These were maned by Australian officers and seaman from that point on.  Her commanders were : T. Moore; W. MacGowan; J. Buchanan; H.C.C. Mills.

Now when was she sailing when the postcards were written?  We have some clues-

Some searching on Trove,  found this article concerning the encounter with a German raider's searchlights from the Bendigo Advertiser, Thursday 6th April, 1916: 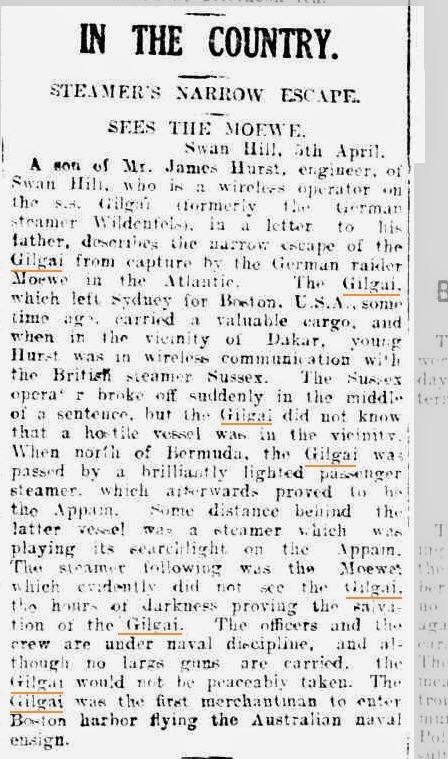 Rather  difficult to read, so here is a transcript:

A son of Mr. James Hurst, engineer, of Swan Hill, who is a wireless operator on the s.s. Gilgai (formerly the German steamer Windenfels), in a letter to his father, describes the narrow escape of the Gilgai from capture by the German raider Moewe in the Atlantic. The Gilgai, which left Sydney for Boston, U.S.A., some time ago, carried a valuable cargo, and when in the vicinity of Dakar, young Hurst was in wireless communication with the British steamer Sussex. The Sussex operator broke off suddenly in the middle of a sentence, but the Gilgai did not know that a hostile vessel was in the vicinitv. When north of Bermuda, the Gilgai was passed by a brilliantly lighted passenger  steamer, which afterwards proved to be tho Appam. Some distance behind the latter vessel was a steamer which was playing its searchlight on the Appam. Tho steamer following was the Moewe which evidently did not see the Gilgai, tho hours or darkness proving the salvation of' the Gilgai. The officers and the crew are under naval discipline, and although no large guns carried, the Gilgai would not be peaceably taken. The Gilgai was the first merchantman to enter Boston harbor flying the Australian naval ensign.

So this appears to fit, and it is likely that the ship was sailing to Boston, leaving Port Adelaide in November 1915, encountering the Moewe in February 1916, with Captain Moore commanding.

So who wrote the postcards?  There is no name, and very few clues:
I will ask my fellow genie Maria on the Genies Downunder Podcast to mention the story and we can see what happens, hopefully it will be recognised by someone's family and they can be re-united with the postcards.

I can be contacted by leaving a comment on this page, or email me by clicking on <view my complete profile> located on the left of the page.